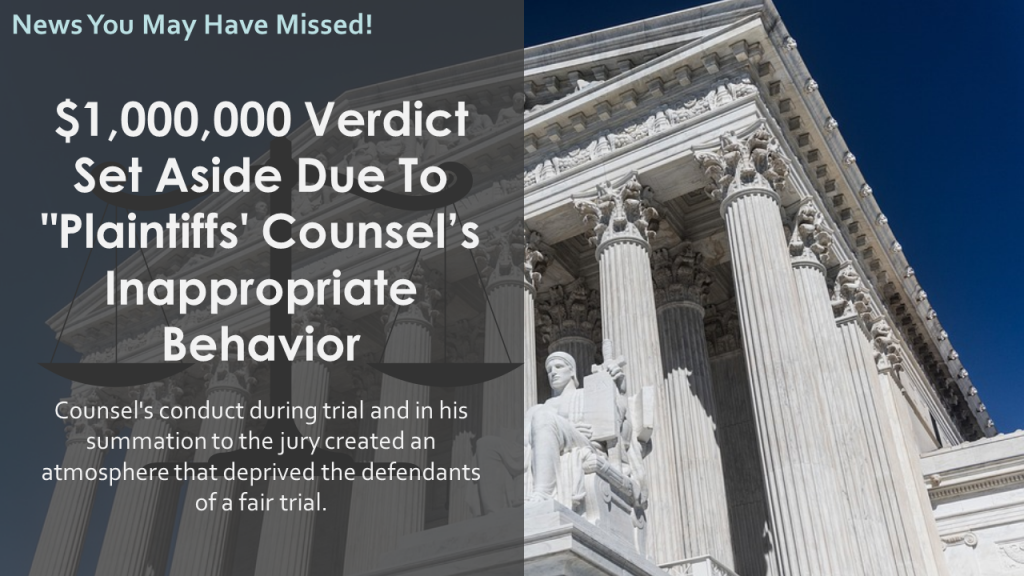 $1,000,000 Verdict Set Aside Due To “Plaintiffs’ Counsel’s Inappropriate Behavior

On November 30, 2009, Joseph Hilt consulted the defendant, Joseph S. Reiss, an allergist, complaining of an allergic reaction. Reiss concluded that the drug Lisinopril, an ACE inhibitor that the decedent had been taking for high blood pressure for three years, was causing the allergic reaction, and Reiss told the decedent to stop taking Lisinopril…law.com, Hilt v. Carpentieri, 2021

Reiss saw the decedent again on December 7 and December 21, 2009, and on both occasions, he confirmed that Hilt was no longer taking Lisinopril. Reiss did not communicate with the defendant Adam Carpentieri, Hilt’s primary care physician who had prescribed Lisinopril to him. On December 29, 2009, Hilt collapsed at his home, and was admitted to New Island Hospital that day. He died on January 2, 2010. Gerard Cantanese, a medical examiner, testified that the cause of death was an anaphylactic reaction due to Lisinopril.

Following a suit and jury trial, the jury determined, in pertinent part, that Reiss had departed from good and accepted medical practice in failing to communicate with Carpentieri regarding his decision to have the decedent discontinue the use of Lisinopril, and that this departure was a substantial factor in bringing about the decedent’s anaphylactic reaction and subsequent death. The jury awarded the plaintiff the principal sums of $250,000 for pain and suffering and $750,000 for wrongful death.

In an order entered May 3, 2017, the Supreme Court granted that branch of the Reiss defendants’ motion which was to set aside the jury verdict and for a new trial on the ground that the plaintiff’s counsel engaged in inappropriate behavior in the presence of the jury and that the cumulative effect of counsel’s conduct during the trial deprived the defendants of a fair trial.