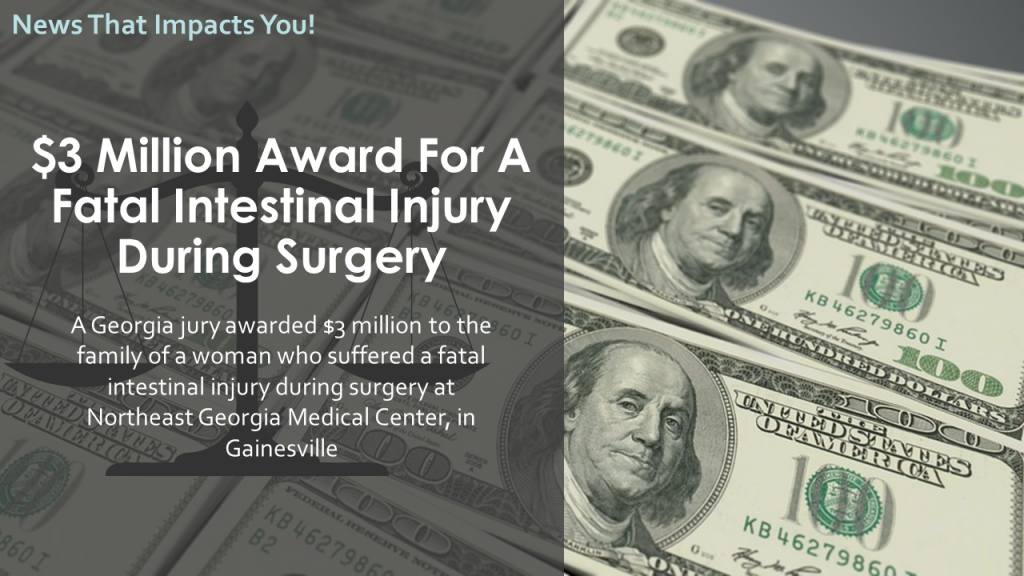 $3 Million Award For A Fatal Intestinal Injury During Surgery

On May 3, 2016, Frances Mitchell went to the medical center to have a pelvic mass removed via laparoscopic abdominal surgery. Her surgeon was Andrew Green, MD, a gynecologic oncologist and member of the Northeast Georgia Physicians Group. Soon after returning home, Mitchell began experiencing pain. A family member contacted the hospital for advice and was told to feed the patient broth and keep her walking. Her pain grew worse, however, and she was taken by ambulance to the emergency department (ED)​…medscape.com, Lawsuit: Family Claims Bowel Perforation During Surgery Killed Patient, Wayne J. Guglielmo, MA, 2021.

Back in the hospital, she underwent a CT scan, which was inconclusive, and blood tests, which indicated she was septic. Her temperature was slightly elevated, up 2° from admission. Nevertheless, she was sent home.

Over the next few days, Mitchell’s family called the hospital several times because her condition failed to improve. On May 7, 4 days after her surgery, she died. An autopsy performed by the Georgia Bureau of Investigations listed the cause of death as “peritonitis due to a small bowel perforation.“

In 2017, Mitchell’s mother and her two grown children sued the medical center, Green, his medical practice, an ED doctor, and several other defendants.

The plaintiffs’ suit alleged that during the laparoscopic procedure on May 3, Green perforated Mitchell’s small bowel but neither properly diagnosed nor repaired his mistake. The suit further alleged that Green and the other defendants were negligent in their postsurgical care. The alleged negligence included sending Mitchell home after she had returned to the hospital, despite her damaged intestine; neglecting to respond to multiple family complaints about her condition; and failing to document those complaints, as required by hospital policy.

The jury, after listening to both sides, took only 5 hours to return with a $3 million judgment in favor of the plaintiffs.