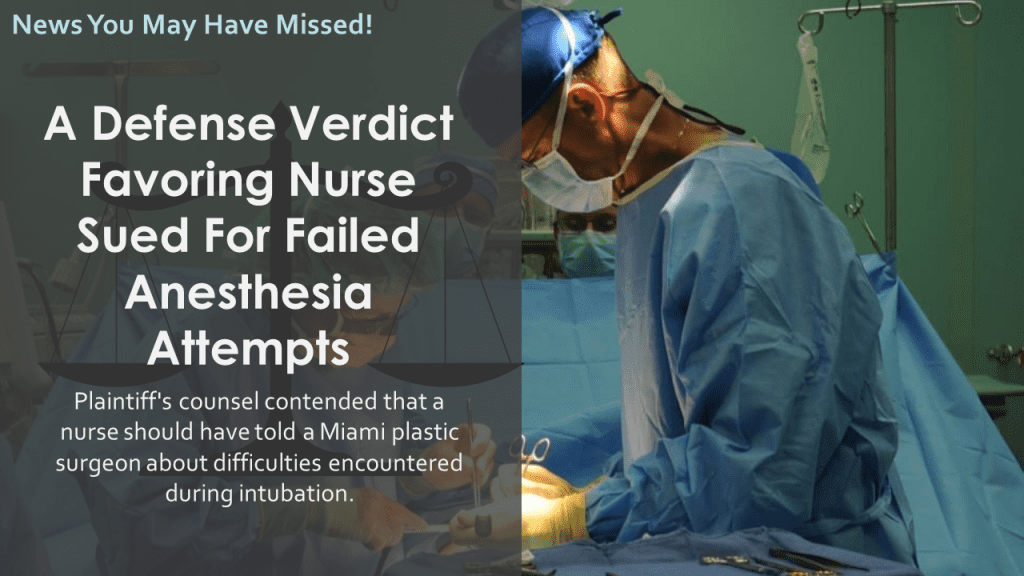 A nurse was found not liable for an injury that occurred to a patient due to failed intubation attempts during an abdominal liposuction…law.com, Miami Jury Renders Defense Verdict, Finding Nurse Had No Reason to Disclose Failed Anesthesia Attempts, Melissa Siegel, Oct 2022

On Jan. 17, 2017, plaintiff Lucia Urquiola, an unemployed woman in her 505, presented to Miami Plastic Surgery for an abdominal liposuction. Dr. Nirmal Joseph, an anesthesiologist, initially attempted to intubate Urquiola for the surgery. Joseph had trouble seeing

the airway and had to try a blind insertion of the tube.

After two failed intubation attempts, Dr. Germana Silva took over and successfully intubated the patient. Nurse Ileana Sotolongo- Breaux assisted both doctors. The surgeon was not in the operating room at the time.

The liposuction went as planned. However, Urquiola complained of a sore throat in the days after the procedure. Doctors diagnosed a perforation of the right pyriform sinus. The perforation led to an abscess, and the draining of that abscess caused an injury to the vocal cord.

Urquiola sued Joseph, Silva and Sotolongo-Breaux. Urquiola alleged that the doctors and nurse were negligent during and after the intubation. Urquiola additionally sued the doctors’ employer, Kendall Anesthesia Associates, and the nurse’s employer, Miami Plastic Surgery, for vicarious liability.

The defense claimed that, before and during the surgery, Sotolongo-Breaux did not know exactly what had happened during the

intubation. Per the defense, she only knew that multiple intubation attempts were required, which is not unusual. The defense maintained that Sotolongo-Breaux had no reason to tell the surgeon about the intubation.

The jury rendered a defense verdict. It found there was no negligence by Sotolongo-Breaux that was a legal cause of injury to Urquiola.