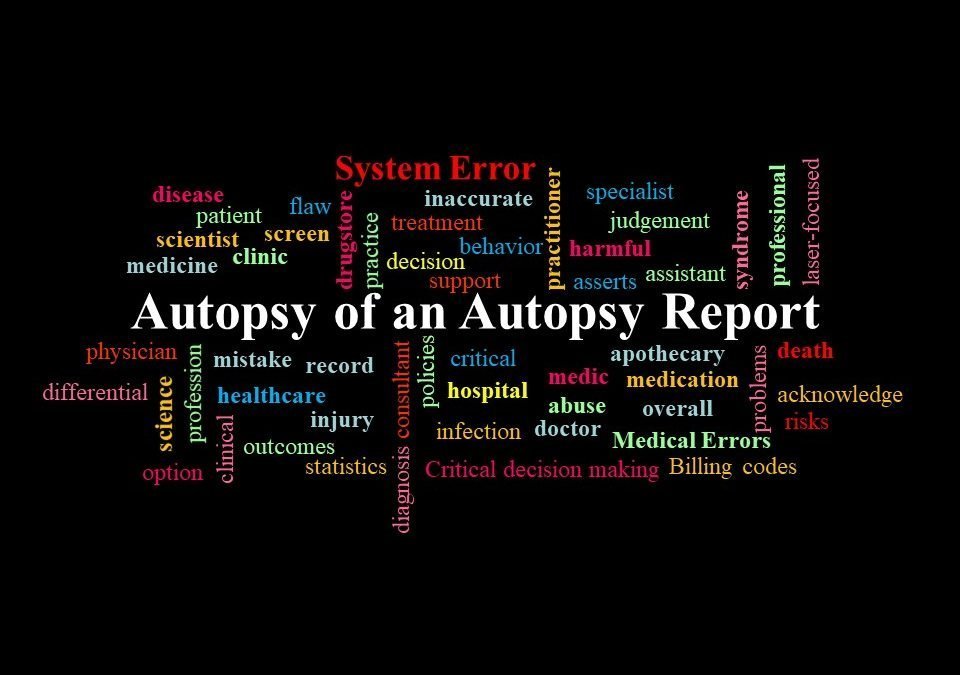 Autopsy of An Autospsy Report

We have all reviewed death certificates and autopsy reports. We often look at these reports and see the cause of death, and we think the answer is clear.

This is a common misconception

For example, the reports typically state the cause of death was heart failure, cardiac arrest, aneurysm. But how many times have we seen on the certificate or report where it states the cause was due to medical error? Never. That’s because the cause of death on a death certificate or autopsy report is directly linked with the ICD code for the diagnosis. The CDC relies on these codes to calculate statistics for deaths nationwide. ICD billing codes are what clinicians use for medical records and insurance reimbursement claims. These billing codes are not meant for national health statistics. Furthermore, there is no code for medical error.

A recent U.S. patient-care study by Johns Hopkins University estimated that more than 250,000 hospital patient deaths per year stemmed from medical error, making it the third leading cause of death in the United States today. This calculation doesn’t include the number of Americans who die at home as a result of these errors. The authors of the study concluded that the current method in reporting cause of death has a serious limitation, and they have recently appealed to the CDC requesting a change in the current method of listing cause of death on reports. To date, no changes have been made.

Illness or injury are not the only reasons people die. They also die from preventable causes, such as unintended acts or diagnostic errors. If someone trips and accidentally disconnects a ventilator power cord and the patient on the ventilator dies, the cause of death listed on the death certificate is likely to be respiratory failure, though the actual cause was human error. Without that documentation, however, it’s as though the problem of medical errors doesn’t exist.

How Can We Make An Impact?

We need to take a closer look. We need to review medical records, not just look to the death certificate or autopsy report for answers. We must distinguish between cause of death and manner of death. We need to investigate the disease process, and the cause of death itself, to determine where things went wrong. We need to evaluate the events preceding the patient’s death, to help prevent these medical errors in the future.