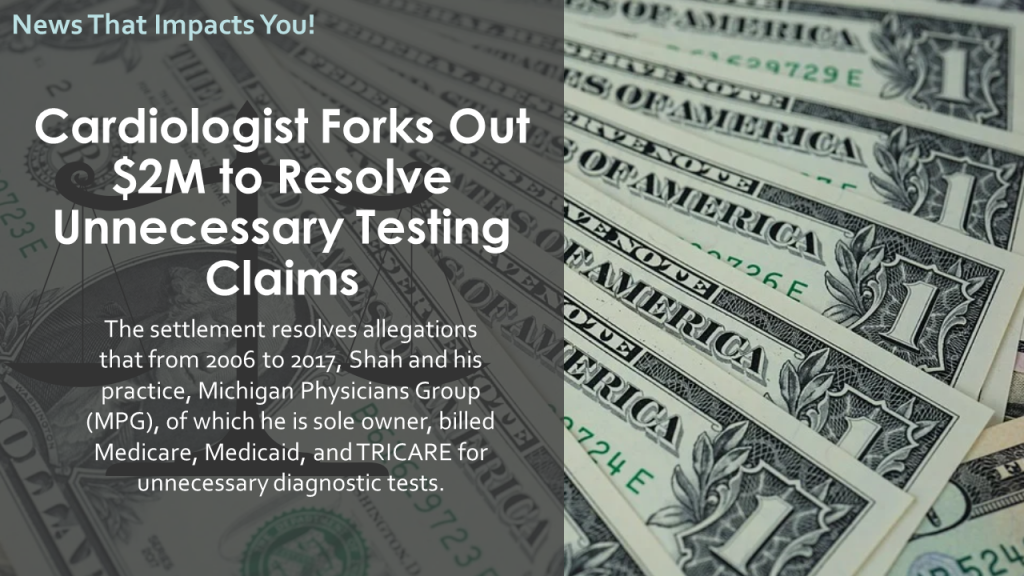 The settlement resolves allegations that from 2006 to 2017, Shah and his practice, Michigan Physicians Group (MPG), of which he is sole owner, billed Medicare, Medicaid, and TRICARE for unnecessary diagnostic tests, including ankle brachial index and toe brachial index tests that were routinely performed on patients without first being ordered by a physician and without regard to medical necessity. The prosecutors also alleged that Shah was routinely ordering, and MPG was providing, unnecessary nuclear stress tests to some patients.

“Subjecting patients to unnecessary testing in order to fill one’s pockets with taxpayer funds will not be tolerated. Such practices are particularly concerning because overuse of some tests can be harmful to patients,” acting US Attorney Saima Mohsin said in the news release. “With these lawsuits and the accompanying resolution, Dr Shah and Michigan Physicians Group are being held to account for these exploitative and improper past practices.“ In addition to the settlement, Shah and MPG entered into an Integrity Agreement with the Office of Inspector General for the US Department of Health and Human Services (HHS), which will provide oversight of Shah and MPG’s billing practices for a 3-year period.

There was “no determination of liability” with the settlement, according to the Department of Justice. Shah’s case was sparked by two whistleblower lawsuits filed by Arlene Klinke and Khrystyna Malva, both former MPG employees.

The settlement comes after a years-long investigation by the HHS acting on behalf of TRICARE, a healthcare program for active and retired military members. Allegations that William Beaumont Hospital in Royal Oak, Michigan, paid eight physicians excessive compensation to increase patient referrals led to an $84.5 million settlement in 2018.

Shah was one of three private practice cardiologists who denied involvement in the scheme but were named in the settlement.