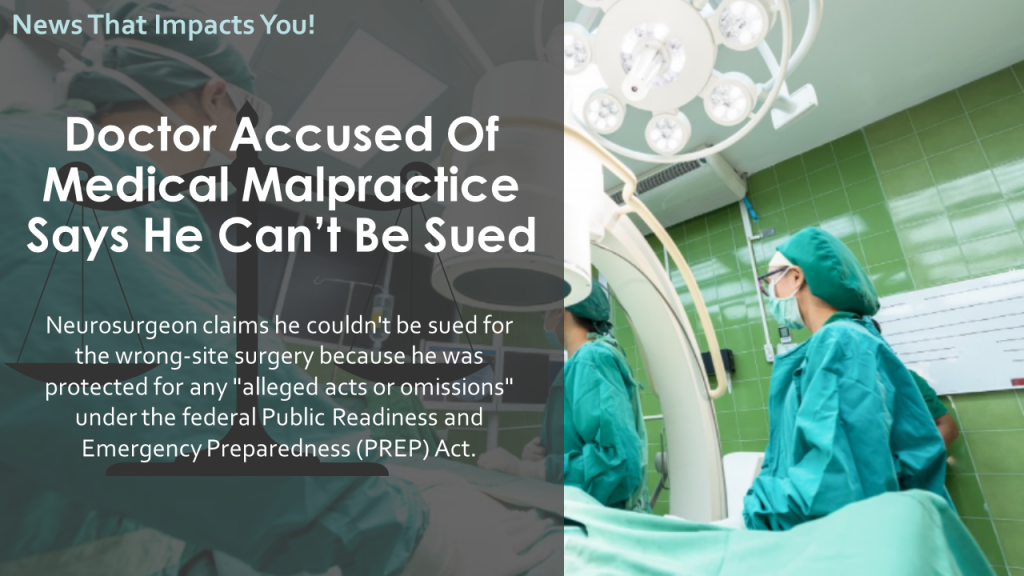 Doctor Accused Of Medical Malpractice Says He Can’t Be Sued

A neurosurgeon who operated on the wrong side of his patient’s spine claims he can’t be sued because of a federal law that protects healthcare professionals during a public health emergency, according to a a report by KSDK, an NBC-affiliated television station in St. Louis, Missouri….medscape.com, Wrong-Site Surgery Doc Says He Can’t Be Sued, Wayne J. Guglielmo, MA, 2021.

Natalie Avilez, who lives in Missouri with her husband and five children, had been suffering from intense back pain. She was referred to Fangxiang Chen, MD, a neurosurgeon affiliated with Mercy Hospital and Mercy Hospital South, in St. Louis. Avilez reportedly claims that Chen told her that an “easy” surgery – a hemilaminectomy – could relieve her back pain.

Something went wrong during the procedure, however. Chen ended up operating on the left side of Avilez’s spine instead of the right side, where he had initially diagnosed disk-related pressure. Chen realized his mistake while his patient was under anesthesia but couldn’t remedy it.

In the recovery room afterward, Chen explained what had happened to his patient, who permitted him to redo the surgery the following day. But the redo didn’t remedy Avilez’s pain; in fact, the second surgery made things worse.

In January of this year, Avilez filed a medical malpractice suit against Chen and Mercy. But the neurosurgeon made a surprising claim: He said he couldn’t be sued for the wrong-site surgery because he was protected for any “alleged acts or omissions” under the federal Public Readiness and Emergency Preparedness (PREP) Act.

Initially passed in 2005, PREP was intended to shield doctors and other licensed healthcare professionals from liability during a public health emergency except in cases of willful misconduct.

Avilez’s attorney, Morgan Murphy, doesn’t think so. “Obviously, we are not claiming that COVID had anything to do with the fact that Dr Chen operated on the incorrect side of Natalie’s spine. It is a fairly straightforward situation. A doctor should never perform the incorrect surgery, period.”

The story will be updated as it unfolds.