$1.95M Settlement for Estate of Man Who Died From Prescription Drug Overdose

Prior Arbitration Clause Not Binding To Pursue Med Mal Case

Baby’s Death Due to Placental Injury, Not Medical Negligence 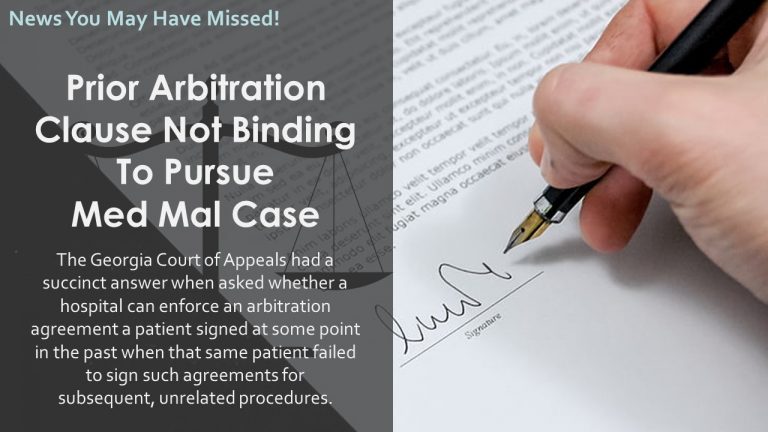 Prior Arbitration Clause Not Binding To Pursue Med Mal Case

While Georgia has “a robust policy” favoring arbitration, wrote Dillard, such agreements “are still contracts, and the presumption of arbitrability-strong as it is-cannot displace the traditional rules of contract formation.” In this case, he said, Emory’s practice of “re-presenting patients with admission forms that include an ostensibly indefinite arbitration agreement” cannot suffice to force them into arbitration and “does not qualify as an agreement by those patients.”

The case began in 2018 when plaintiff Richard Farrell underwent a kidney transplant at Emory University Hospital. In March and April, he was treated at Emory several times and each time was presented with an admission agreement, which included a stipulation that any claims or disputes would be resolved by binding arbitration, with a line for a signature and date.

Later that August he went to Emory’s emergency room complaining of abdominal pain and was admitted, undergoing a procedure to insert a shunt to relieve fluid, during which a major blood vessel was punctured, allowing a large amount of blood to enter his pleural cavity. In 2019, Farrell sued Emory University Hospital and Emory Healthcare, and doctors Robert Ermentrout, Irwin Best and Younis Alazzawi for medical malpractice.