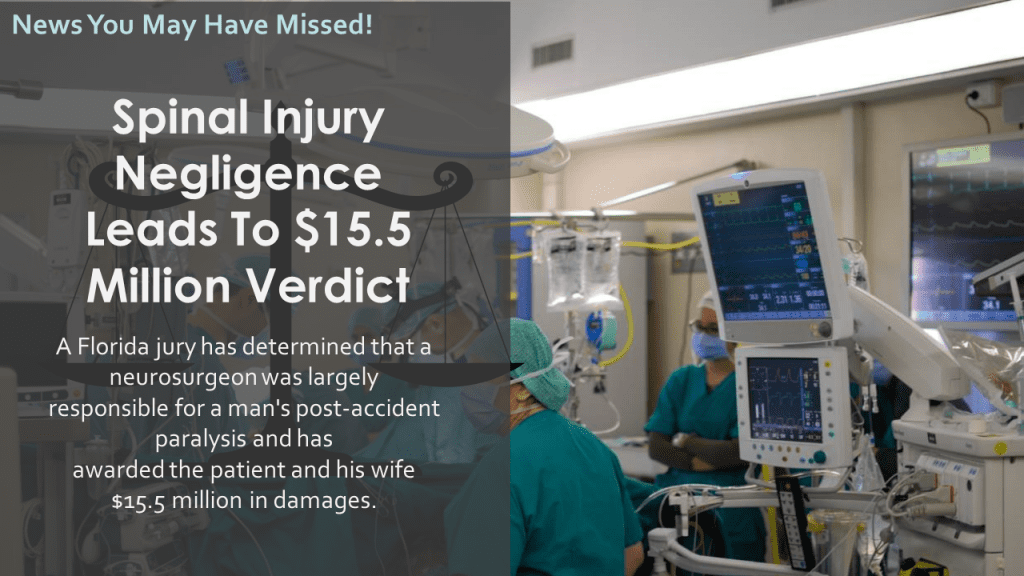 Neurosurgeon Mark A. Fulton, MD, failed to diagnose and subsequently treat an injury that resulted in permanent paralysis, said the jury in a verdict that came after a monthlong trial in a Brevard County, Florida, circuit court…medscape.com, Spinal Injury Diagnosis, Repair ‘Negligence’ Ends in $15.5 Million Verdict, Alicia Ault, Aug, 2022

The jury also assigned a portion (25%) of the blame to radiologist Jared Thomas, MD, who they said missed signs of

catastrophic damage on the initial CT scan performed on the patient, Jean Magloire.

vehicle. He was transported to Holmes Regional Medical Center.

Magloire’s lawyers charged that Fulton failed to see the bone chip in the spinal canal and was negligent in not ordering an MRI to follow up. Fulton took Magloire off spinal precautions, which had been in force for the first 48 hours after the surgery.

Three weeks after the accident, Magloire told the nursing staff he could not feel his bowel movements. An MRI was ordered, and it showed a large herniated disc penetrating the spinal cord.

The defense countered that Magloire was paralyzed on impact in the initial accident. However, Magloire’s attorneys said that if Fulton had properly read the initial CT and conducted an immediate MRI, it would have been possible to operate and alleviate the disc compression and thus prevent paralysis.