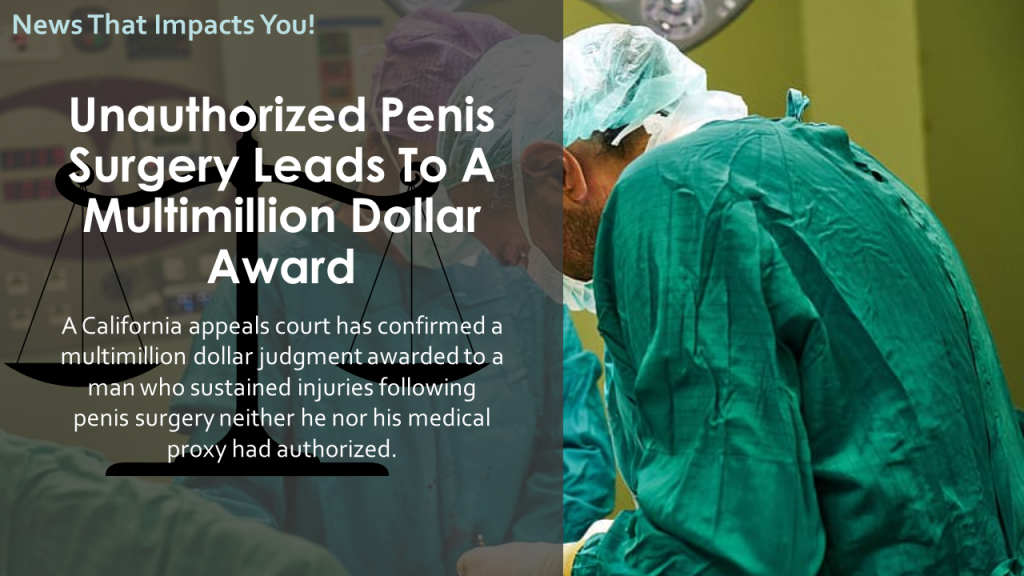 In 2014, Keith Burchell went to Loma Linda University Medical Center, in Loma Linda, California, to have a small scrotal mass removed for testing. During the procedure, however, Burchell’s surgeon, of Faculty Physicians and Surgeons of the Loma Linda University School of Medicine (FPS), discovered that the mass was more extensive than his presurgical exams had indicated, involving not only Burchell’s scrotum but his penis as well….medscape, Man Wins Big Award for Unauthorized Penis Surgery, Wayne J. Guglielmo, 2020

Believing this larger tumor to be malignant — and convinced that even a benign one of this size posed a potential risk should it continue to grow — the surgeon elected to remove the total mass. In the process, he excised tissue not only from his patient’s scrotum but also his penis, a procedure known as a “resection of the proximal corpora.” Such a resection, the physician understood, would almost certainly cause his patient to become impotent.

Despite this, the surgeon went ahead without further consultation with either his patient (who was under anesthesia) or his patient’s designated proxy, his ex-wife. Burchell experienced substantial postsurgical side effects. Some of these — including an infection that required emergency treatment.

In his suit against the medical group, FPS, Burchell alleged both professional negligence and what’s known in the law as “medical battery,” which in California can be of two kinds. The kind most relevant in the Burchell case is when a doctor obtains patient consent to perform one type of procedure but ends up performing a “substantially different” type for which no consent has been obtained.

The appeals court however, disagreed. It would have been one thing, the justices said, had the surgeon, in the course of treating the patient, encountered a complication requiring a procedure for which the patient had not consented but that nevertheless constituted a life-threatening emergency requiring immediate attention.