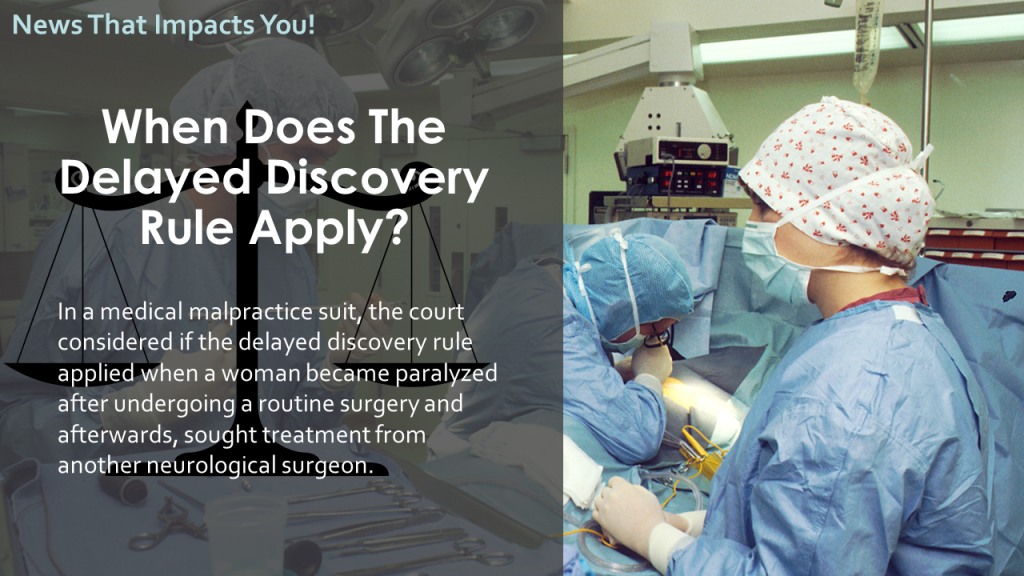 When Does The Delayed Discovery Rule Apply?

The medical malpractice statute of limitations for filing a legal claim is three years from the date of the injury or one year from the date that the plaintiff learns that he or she has been injured or reasonably should have learned about the injury. However, the exception to it is the delayed discovery rule that applies to cases in which a person discovers the cause of his or her injury after a delay of some period after the incident…californiaaccidentattorneysblog, CA Courts Rule on Statute of Limitations in Medical Malpractice Claims, Steven Sweat, Mar, 20

Judith Brewer underwent a surgery on April 22, 2013, at Doctors Medical in Modesto, California. The morning after her surgery, Brewer suffered from paralysis and lost sensation in her arms and legs. Subsequent to that, Dr. Benjamin J. Remington saw Brewer on April 24, 2013. Instead of performing an emergency spinal decompression procedure, Remington chose to wait to until May 30, 2013, to allow the swelling to subside.

READ MORE…(since the story is long, the rest should be on the EW page.)

Brewer underwent the spinal decompression procedure on May 30, 2013 after which, she regained some sensation in her arms and a little in her legs. However, her paraplegia was permanent. Brewer and her husband filed a lawsuit on June 9, 2014, against Drs. Bedi and Pistel (the doctors who performed the first surgery), Doctors Medical, and Stanislaus Orthopedic and Sports Medicine Clinic for medical malpractice and loss of consortium because of the April 22, 2013, surgery. Upon requesting and receiving the medical records, they sent them to a neurosurgical expert named Dr. Brian Andrews who opined on July 20, 2015 that Dr. Remington should have performed the procedure as an emergency surgery on April 24, 2013 itself and not waited.

Acting on this opinion, the Brewers filed an amendment on July 24, 2015, to add Dr. Remington as a defendant. Submitting an argument, Remington put forth the following:

~The plaintiffs had added him as a defendant outside of the statute of limitations.

~Brewer knew or should have reasonably known about her injury on May 30, 2013, when she didn’t regain many functions following the second surgery.

The plaintiffs argued that the one-year statute of limitations only began to run when they knew or should have reasonably known that the delay of surgery caused a second injury to Brewer. Since the discovery was not produced by Doctors Medical until July 8, which was outside of the one year from the date of Brewer’s second injury, they argued that they did not know or have any reason to know that Dr. Remington had caused the second injury until after they had received Dr. Andrews’ expert opinion.

The court while initially granting the motion for summary judgment, corrected itself upon a review and agreed that it had committed a legal error and granted the Brewers’ motion.

In arriving at the decision, the court reviewed the statute of limitations for medical malpractice claims. It noted that the statute of limitations starts to run when the last element of the cause of action accrues. It observed that Brewer could not have reasonably discovered her second injury that was caused by Remington until she had received the expert’s opinion about Remington’s negligence in July 2015 and that unsatisfactory outcomes by themselves are not enough to give a plaintiff notice of a doctor’s negligence.

The court affirmed the lower court’s ruling and returned the case for further proceedings awarding the plaintiffs their legal costs on appeal.