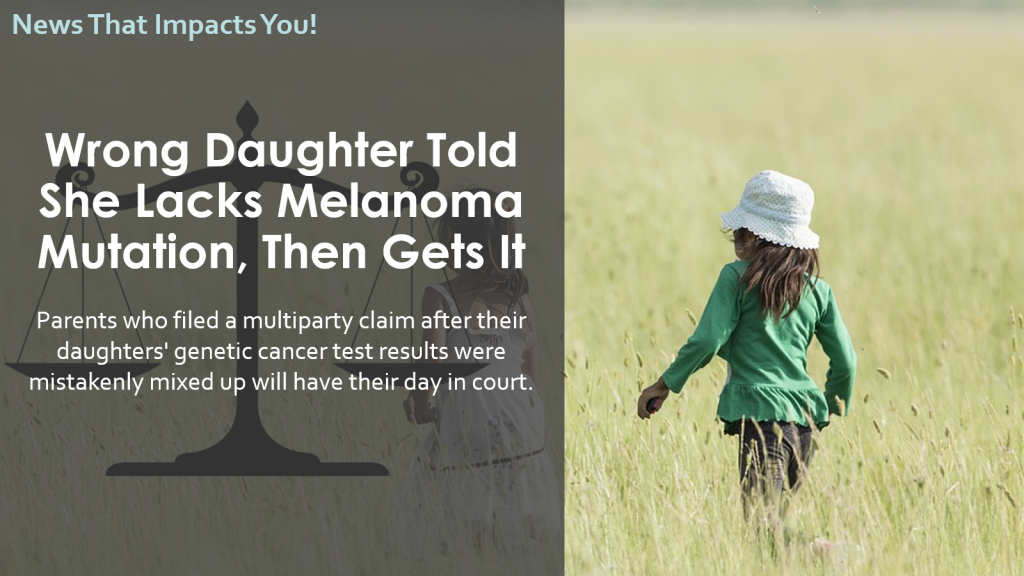 Wrong Daughter Told She Lacks Melanoma Mutation, Then Gets It

In 1999, Michael and Susan Lonsway brought their two young daughters — Delaney, 5, and, Cameryn, 3 — to what was then the University of Michigan Health System (now Michigan Medicine), in Ann Arbor, to be genetically tested for melanoma, which ran in Michael’s family. The tests — sent to the Yale University School of Medicine for analysis — showed that Cameryn had inherited a family genetic mutation that put her at high risk for melanoma. Her sister, Delaney, it appeared, did not have that same genetic mutation……www.medscape.com, Wrong Daughter Told She Lacks Melanoma Mutation, Then Gets It, Wayne J. Guglielmo, MA, 2021

As Cameryn grew up, the Lonsways took “stringent” steps to protect her from sun damage. In 2016, though, it was Delaney who developed skin cancer.

Court papers indicate that Yale had mixed up the genetic testing results. A routine audit in July 2014 identified the mistake, and the lab’s scientific director promptly informed an official at the University of Michigan, asking that the Lonsways be notified immediately.

Subsequent blood tests performed at the University of Pittsburgh Medical Center revealed the mistake: It was Delaney who carried the genetic mutation, not Cameryn. The Lonsways had been protecting the wrong daughter.

In August 2018, the couple filed two lawsuits — one against defendants at both U-M and Yale, and another in a second venue against U-M defendants only. Both suits were later consolidated into a single case. (During litigation, Everett signed an admission of liability.)

In reviewing the lower court’s decision, however, the appeals court disagreed. For the purposes of the Lonsways’ suit, the appeals court found, the clock started ticking on August 16, 2017, when, as the Detroit Free Press story puts it, “the family learned U-M knew about the test results reporting error but failed to inform them.” Given this time frame, neither claim was subject to the state’s usual statute of limitations. The Lonsways’ case would resume.